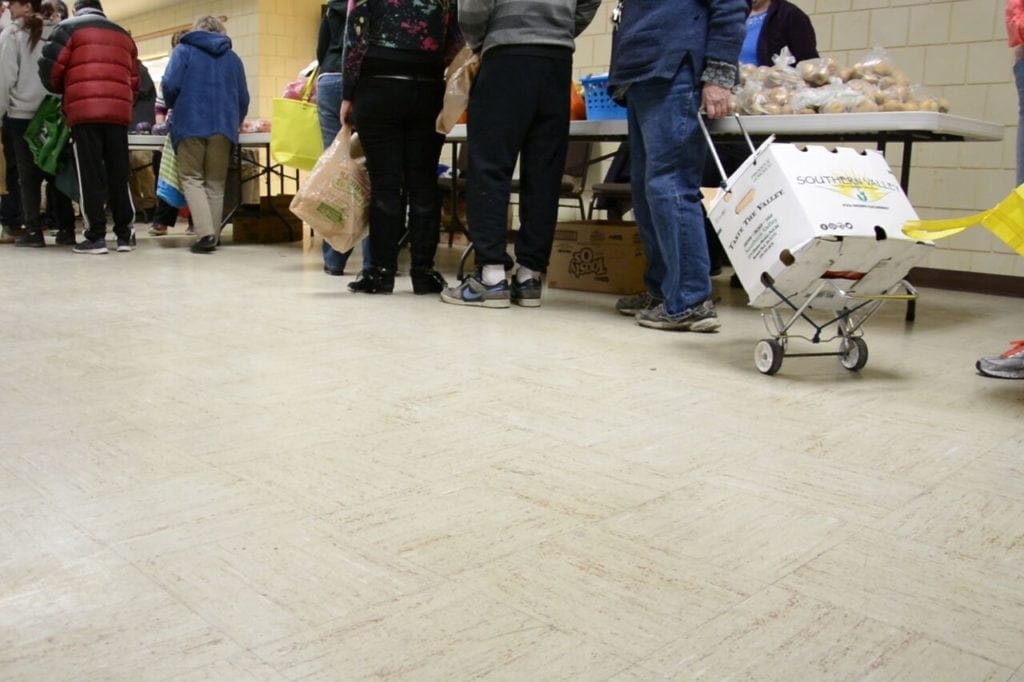 This is Part 3 of Feeding Tompkins, an in-depth look at food insecurity in Tompkins County and a collaborative project between the Ithaca College Park Scholar Program, WRFI News, The Ithaca Voice, and Hot Potato Press.

On a recent Wednesday morning, Marge Strosnider was setting up the Newfield Kitchen Cupboard food pantry when she took stock of the items ordered from the Food Bank of the Southern Tier and donated by residents. She wanted to provide a variety of healthy foods to the 70 families expected to walk in the door, and noticing a few gaps, she dashed into Ithaca to pick up a few extra groceries to round out the offerings, using donated funds. “I’m happy to do it,” she said.

Strosnider is just one of dozens of volunteers who operate food pantries in Tompkins County. With twenty pantries open more than 130 times per month, the volunteer commitment in our county is staggering. It’s a job that requires professional skills as well as a compassionate attitude.

Strosnider began volunteering at the Newfield pantry, which is hosted by the United Methodist Church, about twenty years ago. Her knowledge of food pantries dates back to her Ithaca childhood, when her widowed mother sometimes struggled to make ends meet. During those times, the family visited food pantries. Later, when her family moved to Newfield, her mother gave back by volunteering.

Following her mother’s example, Strosnider volunteered too, and when the coordinator passed away in 2011, she took over. Today, as a volunteer, she manages a network of 30 volunteers and oversees food orders, deliveries, grant-writing, financial reporting, distribution, and collaborations with public schools, universities, and scout troops.

Other pantries rely on volunteer leaders as well. Joanie Barber started the Danby pantry 29 years ago as a volunteer. Today, the pantry serves about 80 to 100 families per month and she serves as treasurer. She also coordinates about 60 volunteers at the Salvation Army’s Ithaca Kitchen Cupboard, and she tends the pantry there every weekday, spending about 60 hours a month serving 250 to 300 families. “This wouldn’t happen without the volunteers,” she said.

In 2002, Nancy Meyers began volunteering as Director at the Lansing Food Pantry after she retired from full time work. Now she manages about 40 volunteers who do all kinds of tasks, from unloading delivered food to displaying it on tables at The Rink, where the pantry is located. She spends about 26 hours per month running the monthly mobile pantry as well as the pantry, including picking up groceries, checking the mail, cleaning, reaching out to community organizations, and serving about 245 people per month. Plus, Meyers also serves on multiple food pantry advisory boards.

At the Baptized Church of Jesus Christ in Ithaca’s Northside neighborhood, Pastor Ronald Benson and Deaconess Geraldine Herndon and a team of volunteers have been operating a weekly pantry for 25 years, serving about 40 to 50 households. “We meet people in love,” said Benson. “We want people to know that we’re here to do what we can to serve them. Many people have had hard times and there’s no reason to be ashamed.”

And yet, despite the dedication of caring, highly skilled volunteer coordinators and their teams, the pantry safety net relied upon by so many county residents is precarious.

“The emergency food system is fragile,” said Natasha Thompson, President & CEO of the Food Bank of the Southern Tier, in part due to its reliance on volunteers who are starting to age out.

In Dryden, Ione Worth has coordinated a pantry with Aiden Payne since the late 1970s, and now operates the Dryden Kitchen Cupboard at the Presbyterian Church two or three days per week, which serves about 100 to 150 families per month. “The reason I’ve done it so long – and it does take time – is because I really enjoy it. I’m a people-person. We have terrific volunteers and we really like getting to know the people who come,” she said. “But we’re getting old and we need someone else to take over.”

For a calendar of food pantries and free meals in Tompkins County, see here.