Inside the Cargill's Cayuga Salt Mine in Lansing, New York. (DEC)

ITHACA,  NY -- Cargill and the New York State Department of Environmental Conservation (DEC) are being challenged in court over a modified mining permit the DEC issued the company.

Cargill operates a salt mine of over 3,000 acres beneath Cayuga Lake. The lawsuit alleges that the DEC has not taken a hard enough look at the anomalies of thin bedrock Cargill is mining around and, as a result, puts the permit in violation of the New York State Environmental Quality Review Act (SEQRA).

The lawsuit comes from Cayuga Lake Environmental Action Now (CLEAN). It was filed on June 17th, and it seeks to void Cargill's permit until a review  of the anomalies in the mine comply with the standards of SEQRA.

The permit Cargill currently holds precludes the company from mining under a certain anomaly of thinned bedrock, known as the Frontenac Point Anomaly (FPA). This is just one anomaly underpinning CLEAN’s lawsuit. The other’s are known as anomalies A through E.

According to its current permit, Cargill isn’t able to mine beneath anomalies A and B until further studies are but -- according to maps developed by CLEAN with data acquired from the DEC through FOIL -- the mine has already been extensively developed beneath anomalies C and E, and infringed on the recommended 1000 foot buffer around anomaly D.

Cargill’s permit was granted on the basis of a letter the company sent the DEC, agreeing to mine at a 1000 foot set-back from the FPA. But the permit does not include that letter, nor a map or detailed definition of that anomaly.

Water Front, an online outlet covering environmental issues in the finger lakes, reports that Cargill’s maps depicting the FPA have varied widely over the years. A map from 2018 depicts the FPA as an oval shape, while a 2016 map depicts it as something of a fault line. 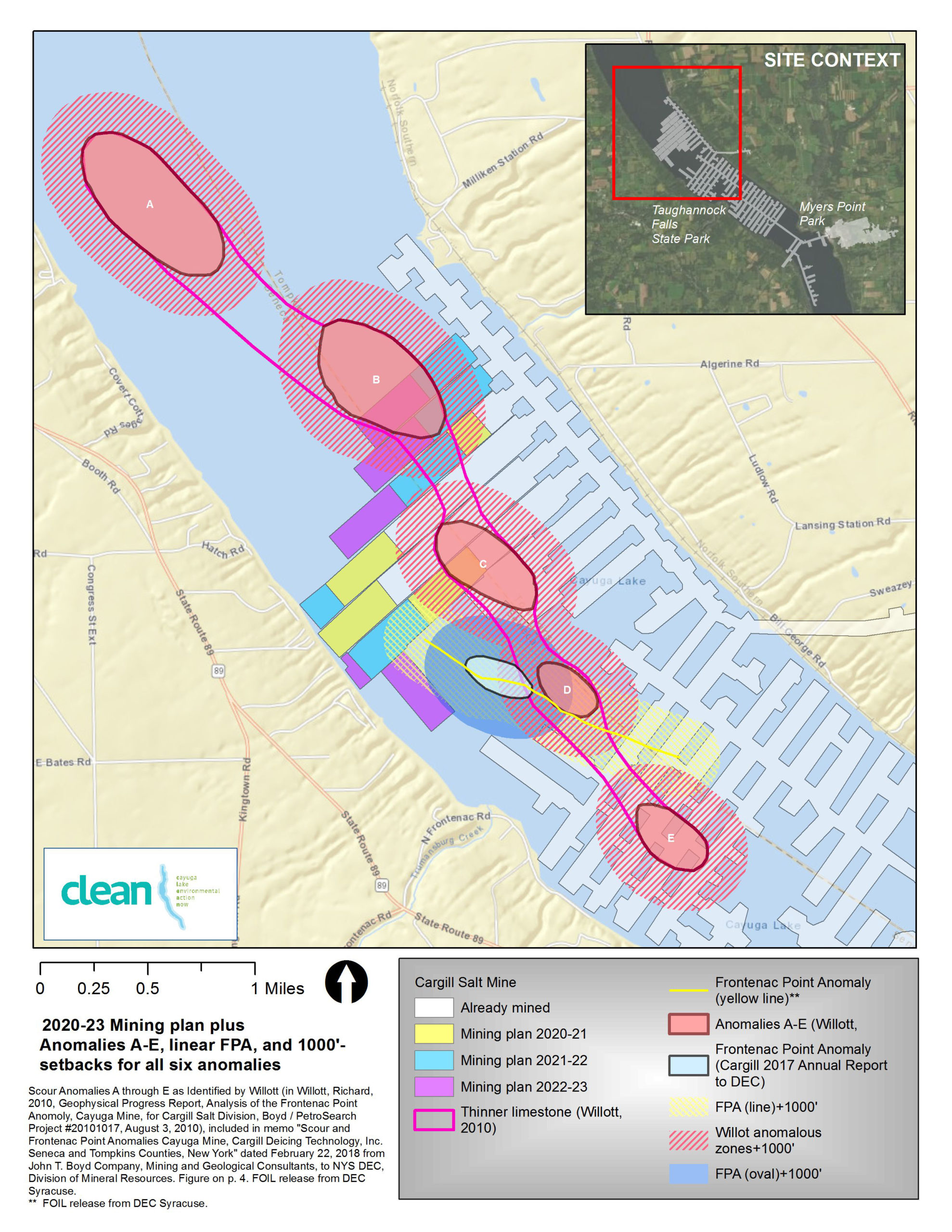 Water Front reported that the DEC and Cargill have refused to provide a copy of the letter Cargill’s permit extension hinged on.

In 2017, CLEAN filed a different lawsuit against Cargill and the DEC. It stemmed from the DEC’s approval of the company’s mine shaft #4 project, but that appeal was ultimately turned down by Tompkins County Court Judge John Rowley, and the Cargill was able to expand it’s mining operations further beneath the lake, where it’s waters were separated from the salt mine by thinner lengths of bedrock.

CLEAN was critical of the lack of a full Environmental Impact Statement required of Cargill on that project, arguing that the potential environmental impacts of the mine expansion were not being taken into account, nor could be fully understood.