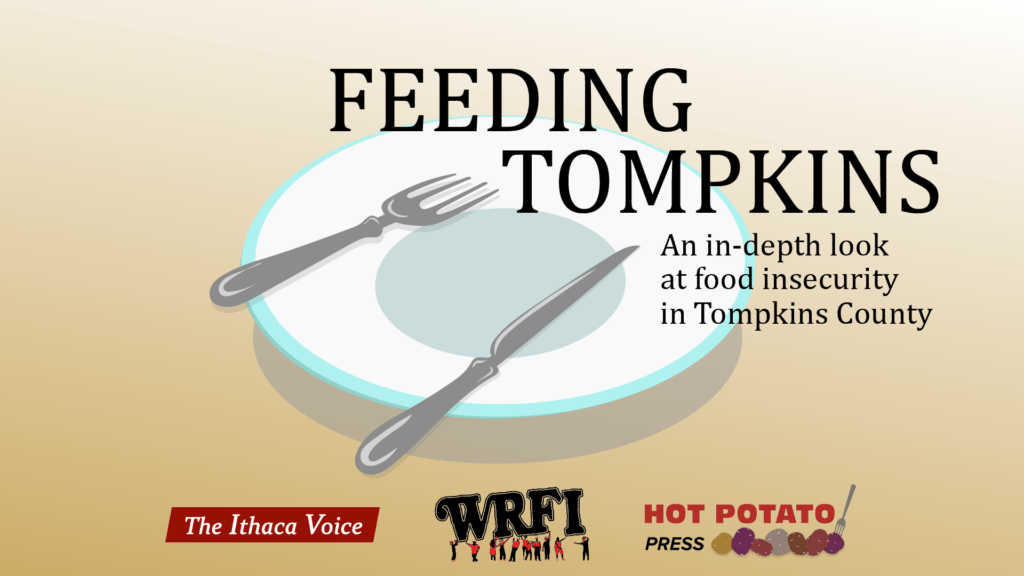 This, is Feeding Tompkins. A collaborative project between WRFI News, the Ithaca College Park Scholar Program, The Ithaca Voice and Hot Potato Press. Over the next eight weeks, we’ll  be exploring food insecurity in Tompkins County through the voices and stories of those most affected, and the organizations working to create change.

Food insecurity is anything but simple

Fourteen thousand five hundred Tompkins County residents are food insecure, according to FeedingAmerica.org. That means 14% of residents here are unable to get an adequate amount of quality food on a regular basis.

Who’s affected? What resources are available, and where do they fall short? When needs remain unmet, what are the consequences for individuals and our community? What new solutions are on the horizon?

These are the questions posed by the Feeding Tompkins series. Links to each segment will be available here.

Listen to the first WRFI News report here, and read on for more details.

Contrary to popular belief, there is no single profile of a food insecure person, according to Natasha Thompson, President of the Food Bank of the Southern Tier.

“The majority of people,” she says, are “regular people.” More than half have one person in their household who is working. And about 5,500 of food insecure people do not qualify for the government SNAP program, but still struggle to put food on the table.

The immediate causes of food insecurity vary, says Thompson. Sometimes people have lost a job, face a devastating health problem, or have encountered some other financial crisis, such as an expensive car repair, Thompson explains. Some people visit a food pantry once to overcome a short-term challenge, like after making an apartment security deposit. Others, such as seniors on fixed incomes, find themselves chronically food-insecure and return for years.

“It’s a hidden issue,” she says. “These are average people.”

Kids experience food insecurity at a higher rate than the general population. One-in-five Tompkins County children is at risk of hunger. Forty percent qualify for free or reduced lunch – a 5% rise in the past five years, and about equal to the national average. However, the numbers vary across districts: 50% of Newfield students qualify, compared with only 23% in Lansing.

To help address the need, the Food Bank of the Southern Tier distributes more than 1.3 million pounds of food, including 250,000 pounds of fresh produce, annually to Tompkins County pantry and meal programs.

The organization regularly purchases staples – like peanut butter, canned tuna fish, cereal, and soups – that make up about 25% of the total food distributed. The rest is either donated from across the country, explains Thompson, or originates from the US Department of Agriculture. A truckload of oranges might arrive from California, or a processing plant might donate pallets of canned asparagus spears. A variety of food, from oats to frozen blueberries, can be found at the Food Bank’s Elmira warehouse.

Local partners use an online system to place orders with the Food Bank, which then delivers the orders to local pantries, such as Immaculate Conception, the largest in the county. One hundred percent of the Food Bank’s programs are “free choice,” says Thompson, and clients take only the food they want.

At many pantries and meal programs, another organization, Friendship Donations Network, complements the food available with fresh fruits, vegetables, and breads rescued from disposal at stores, restaurants, farms, and colleges. Each year, Friendship Donations Network coordinates the collection and distribution of 500,000 pounds of perishable food that would otherwise end up in the landfill.

In Tompkins County, food pantries and free meals are offered seven days a week. And yet, Thompson says, it’s still not enough. The Food Bank alone provides 1.1 million meals each year here, but the total need is 2.5 million. And FeedingAmerica.org reports that the annual budget shortfall needed to bridge that gap exceeds $8.6 million. That’s about an extra $600 per person.

“If we truly want to address food insecurity in America, we need to engage a broad coalition that includes not only the charity sector but also government and the business community,” Thompson says. “People need to understand that charity alone will not solve hunger. Right now, the biggest challenge we face is the threat to the government safety net programs, particularly SNAP. Many lawmakers justify those cuts by saying that charity can take care of the need, but the reality is that the emergency food network only provides 1/20th of food assistance nationally. If SNAP and other programs are cut, the meal gap will grow and more people will be turning to an already stretched rag-tag network of primarily volunteer run pantries and meal programs. While we certainly have a role to play in alleviating hunger, we are by no means the solution.”