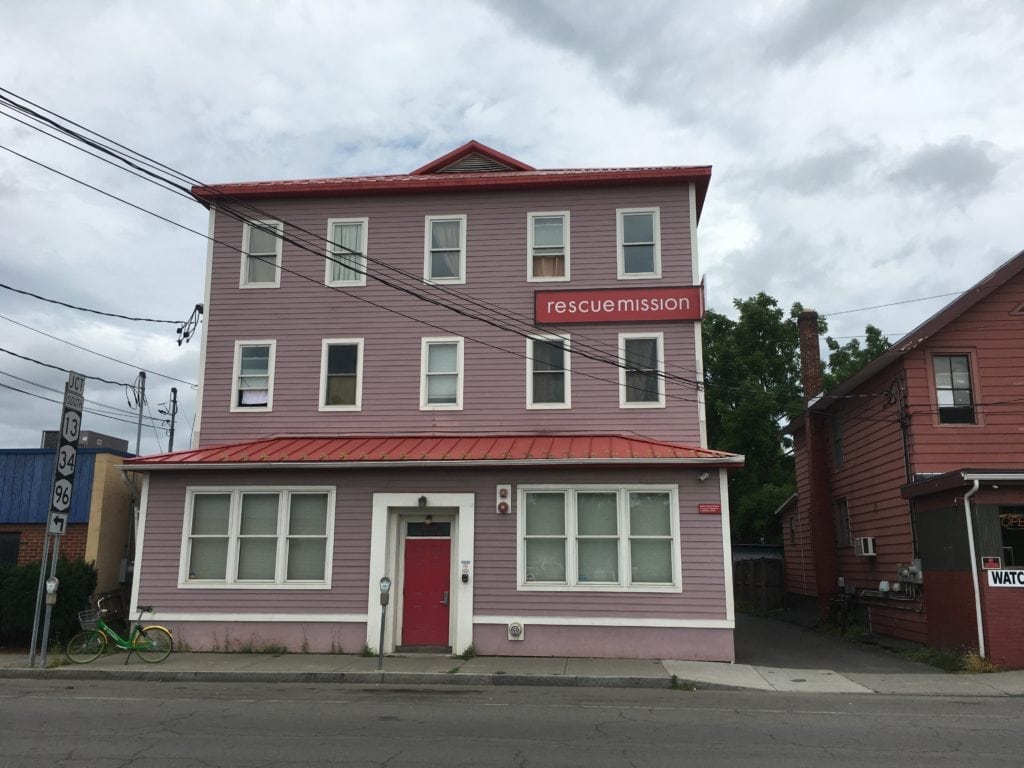 This feature first aired on Aug. 1 on WRFI News at 6. Jackie Marusiak reported and produced this piece, with contributing reporting from Laura Rosbrow-Telem. To hear the full piece, listen here or read the transcript below.

On July 6, local news reported that the Rescue Mission would stop providing homelessness services in Ithaca in October. So everyone’s asking, “What’s going to happen?” This is a big concern for those who use Rescue Mission’s services.

Christopher Rude has been a volunteer at the Rescue Mission for years. He’s also experienced homelessness in the past. When we asked him what he thinks is going to happen, he said he’s scared there might not be a homeless shelter come October. Rude said, “So you’re saying, you’re worried that there just won’t be a homeless shelter? Exactly. That’s pretty much it. Where’s everybody gonna go?”

Several groups have expressed interest in applying for the Rescue Mission’s contract. And on July 25, a number of them attended a “pre-bid” conference with the Department of Social Services, or DSS. There, they asked the county questions about the bidding process for taking over the homeless shelter.

Representatives from the Salvation Army, Catholic Charities, and the Southern Tier Aids Program, or STAP, came to the pre-bid conference. But when asked for comment, STAP clarified to WRFI that they are not applying to the county for the shelter.

One of the main questions was about how the county would reimburse the new homeless shelter provider during the winter months. A relatively new New York State law mandates that homeless individuals and families are guaranteed overnight shelter when temperatures drop below 32 degrees, nicknamed “Code Blue.”

Regarding the Code Blue law, DSS said at the pre-bid conference, “The model of you pay the motel, hotel, you bill us and we’ll pay you, that worked when the numbers were relatively low. It didn’t work very well last year and unfortunately we didn’t recognize that as early as would have been ideal.”

Rescue Mission CEO Dan Sieburg explained in a statement that the main reason they didn’t renew their contract with DSS was because the county was taking too much time to reimburse them for “Code Blue” expenses. When the Rescue Mission’s emergency shelter was full, they placed others in hotels. But the lag time between the hotel stays and the Department of Social Services reimbursing the Rescue Mission was quote “unsustainable.”

According to DSS, they can only promise a reimbursement within 3 weeks.

Those who utilize the Rescue Mission’s services are particularly concerned about who will be taking over. Dave, who told WRFI that he comes almost every morning to the Rescue Mission, said that a lot of people are hoping that DSS doesn’t take over. He said, “If DSS takes over, it’s not gonna be good. They’re gonna treat us just like if we were numbers. Just like as if we were a prisoner.”

Another Rescue Mission guest said that homeless people in Ithaca feel that they’re being pushed out of the community, by college students, the effects of the housing crisis, and the community in general. She told WRFI, “They feel like they’re being pushed out, and we don’t know where to go. We’re already homeless, what else can you take away? They’re going to take away our chance at even having civility, social interaction. And if that happens, it really does become a jungle. Just saying.” 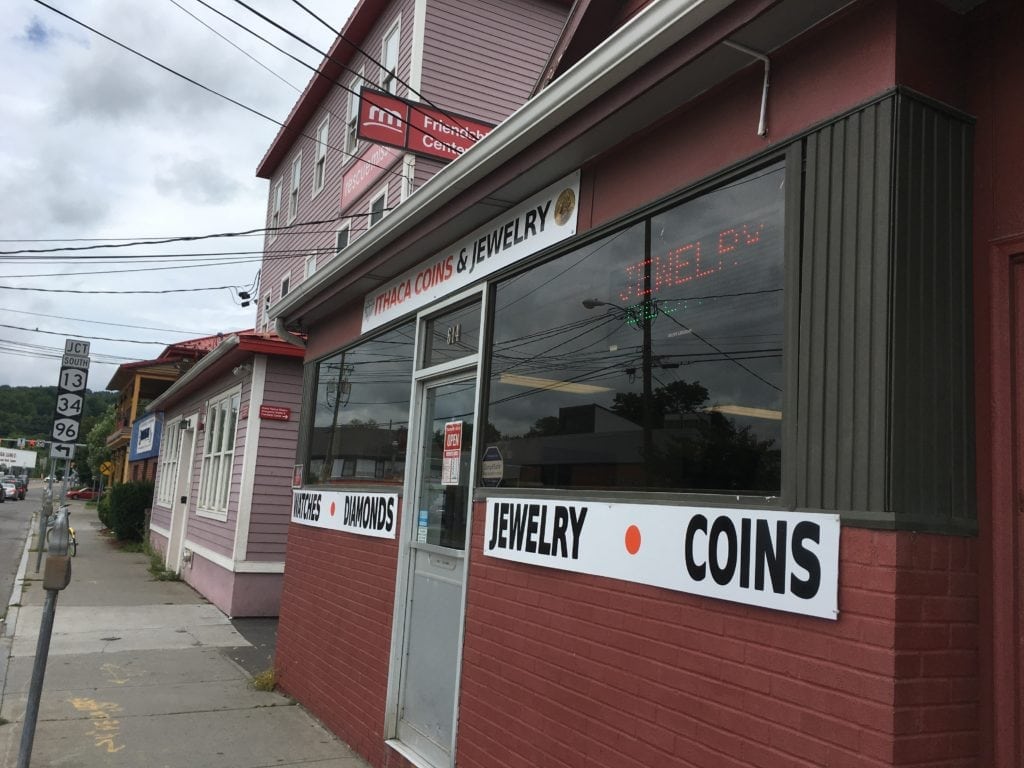 The front of Ithaca Coins and Jewelry, which is next door to the Rescue Mission. Photo credit: Laura Rosbrow-Telem.

He told us, “A lot of the issue is that, not so much they leave there and they don’t care what they do. So they stand right there on my corner. I mean I’m constantly telling people to move out from the front of my store because people don’t feel comfortable coming in here. And in my opinion, that’s on them. If I had my customers loitering in front of their place, in their parking lot and stuff, that would be a problem and I would take care of that. They don’t seem to be doing that on their end.”

Christopher Rude, the Rescue Mission volunteer you heard from earlier, said Rescue Mission folks are aware that local businesses have issues with them. He explained, “The pawn shop hates us and I can understand why. Who wants to have a place by a homeless shelter? Because, no. And personally I think this is a bad location, because you can go right across the street and get alcohol. There are too many places by that, we have to find a better location.”

While Klee complains about being a neighbor to the Rescue Mission, he does recognize that their services are necessary. He clarified, “I have no issue with what they’re doing, I agree with the services, I know there’s a lot of people that need them. I have no gripes against the Rescue Mission. I just would like to see this West End get cleaned up, it’s going through a revitalization, and I think that’s going to be a big hold up until they figure out what to do with that and properly police it. This will never get any nicer down here on the West End. As much money as we put into these buildings, it won’t matter.”

We also talked with Elizabeth Bowen, an associate professor at the University of Buffalo School of Social work and an expert on homelessness in the region. Bowen prefers organizations providing more permanent housing solutions. But, she said emergency shelters like the Rescue Mission are a huge resource. Bowen told us, “Especially in rural areas, emergency shelters are really a crucial safety net for people who may have nowhere else to go in an emergency situation.”

According to the Ithacan from December 2017, Richard Bennett, the director of the Rescue Mission at the time, noticed a significant increase in the demand for beds at the Rescue Mission in the past few years. On December 10, 2017, the Rescue Mission provided beds to 45 people, many in hotel stays. Bennett was also aware of at least 45 other people living outdoors in Ithaca at that time. Three summers ago, only five out of the twelve Rescue Mission beds were ever occupied at one time.

Bowen added that stereotypes about homelessness influence locals’ perceptions of shelters. She said, “I think a lot of people have the NIMBY issue about shelters, so NIMBY (not in my backyard) that people at least assume that clientele that goes along with that is going to be problematic and disruptive. It is a lot of stereotypes about what homelessness looks like and what people who are homeless, what they may be doing. So a lot of it I think is at least driven in part by fear and stereotypes. There’s a discomfort about having to be reminded of homelessness. We know that homelessness is a problem in our communities, but when we see someone who’s visibly homeless, or we see people going to a shelter, we’re forced to think about that.”

Rude can talk from experience. He explained, “People have interacted with him differently when he looked homeless, versus when he didn’t … They say the clothes don’t make the man, but they make the difference in how you’re treated.”

Proposals to DSS are due by August 17 at 4 p.m. DSS said that they expect to announce their choice of who will take over within a week after the deadline. Meanwhile, guests of the Rescue Mission are hoping that whoever the new provider is, they’ll be able to keep up the same level of service to the homeless population of Ithaca.

As Rude put it to WRFI, “Who cares enough and has the authority to run a place like this? We gotta get someone to take over that does it for more than a paycheck. I wanna see more people that have experienced being on the streets, that have had to use a shopping cart to take all their groceries three blocks. Those kinda people. Street smart people, not book smart people. You can’t learn this stuff. You have to experience this stuff.”