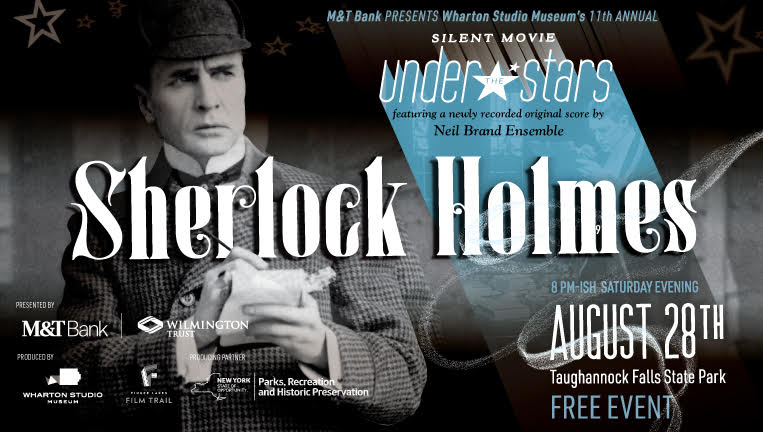 ITHACA, NY -- The Ithaca-based Wharton Studio Museum will present the 1916 silent film version of “Sherlock Holmes”, as its the 11th annual “Silent Film Under the Stars”.

Diana Reisman is the Executive Director of Wharton Studio Museum (WSM). The Ithaca-based organization promotes the role played by Ithaca in the development of filmmaking in the U.S..

In previous editions of “Silent Film Under the Stars”, WSM presented films by the Wharton Brothers film studio, with live musical accompaniment.

“But due to the fact that so few of the Wharton's films are still in existence, we quickly ran out of those films,” said Reisman. “So this year, we thought we would do something a bit different.”

The 1916 edition of Sherlock Holmes had been lost for decades, but has been restored and updated with a new musical score.

Reisman said, “The novels by Arthur Conan Doyle are incredibly, you know, popular. And if there's so many different TV series and other series that, you know, have developed around Sherlock Holmes, we thought this was a lovely choice.”

The one and a half hour silent film is family friendly, and attendees can come early with a picnic, and listen to live music before the film begins.

The film presentation is free, but there is a fee to park in the lot at Taughannock Falls State Park. Organizers encourage people to come with their pod and maintain social distance when necessary.