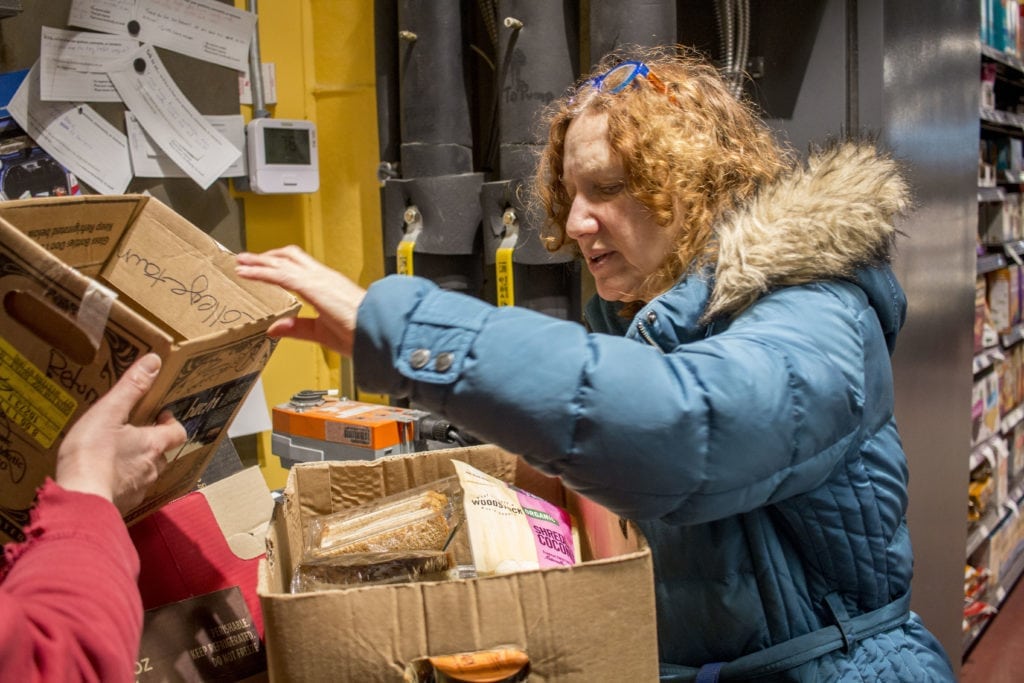 This is Part 8 of Feeding Tompkins, an in-depth look at food insecurity in Tompkins County and a collaborative project between WRFI News, the Ithaca College Park Scholar Program, The Ithaca Voice, and Hot Potato Press.

This article was written by Kelsey O’Connor, of The Ithaca Voice.

ITHACA, N.Y. – On Thursday’s gray morning, Friendship Donations Network volunteer Joni Spielholz walked into GreenStar in Collegetown, where she was greeted as a familiar face. She was led back to a refrigerated area where a box labeled “Donations” was ready for her to grab and add to her trunk that would slowly be filled with rescued food that won’t go to waste.

The box, stuffed that day with prepared sandwiches and salads, yogurts and other items, would later make its way to the Friendship Donations Network’s hub, where it will be distributed to pantries and other local organizations, and make its way to people in need of a meal or food supplies.

It’s estimated that one third of food produced in the U.S., about 133 billion pounds, goes to waste, according to the U.S. Department of Agriculture. The amount of food waste is striking when so many communities like Tompkins County struggle with food insecurity.

Though there was legislation in the works to make businesses that generate two tons or more per week of excess food and food scraps arrange for that excess food be recovered, similar to GreenStar’s arrangement with the Friendship Donation Network. However, it did not make it into Gov. Andrew Cuomo’s FY19 budget.

Rescuing food that would otherwise end up in landfill is one solution taking place daily behind grocery stores and other organizations in Tompkins County.

Other such solutions, policy changes and ideas are also on the minds of the people who make up the Food Policy Council for Tompkins County. The organization, made up of stakeholders from across the community, has been slowly getting off the ground to examine the local food system.

On the short list for the Food Policy Council is holding local officials accountable for food system plans listed in the City of Ithaca Comprehensive Plan.

The plan states the city will transform Ithaca’s food systems into a more “community-based food network and economic engine.” However, little action has taken place on the part of the city. As covered in a previous part of this series, Ithaca Mayor Svante Myrick said there is no city funding set aside to address hunger.

The plan has the following goals for food systems in Ithaca: all city residents will enjoy food security; residents will have opportunities to grow their own food locally through private or community gardens; Ithaca’s community food network will improve food accessibility by connecting food entrepreneurs with policymakers, permitting agencies and community members; and Ithaca will be home to local food-production and food-processing enterprises that capitalize on our location at the heart of a thriving agricultural region.

Dan Hoffman, a member of the Food Policy Council for Tompkins County, said the council has not seen any action on the city’s big food system commitments yet.

“The challenge is clear that if citizens want this to rise to the level of importance that other city issues have they’re going to have to say so and insist that their representatives take action to make progress on these grand goals that the city has,” Hoffman said.

Urban gardening is one effective way to increase access to healthy food. Hoffman, who is also on the board of directors for Ithaca Community Gardens, said they would like the garden, which serves over 150 families, to have more security. The city owns the land and can terminate their lease on a year’s notice. Hoffman said he would also like to see the city, and other local municipalities, incorporate more green space and areas for gardening in development projects.

Other cities who have studied community gardens have found they can play a role in creating food security, but are not a complete answer. Even if relatively low-cost and easy to access, gardening still takes time, which many people don’t have.

Baltimore is one of about 22 cities that have a dedicated food policy director. Holly Freishtat holds that position in Baltimore, and her job is housed in the city’s office of sustainability. She and her “small, lean team” also work closely with the health department to address health, economic and environmental disparities in healthy food priority areas, also known as “food deserts,” communities with little access to healthy food.

Being the food policy director, Freishtat believes strongly that having a policy agenda and strategic plan are key to addressing food insecurity.

“You need programs, but they should be a stepping stone to the next step,” Freishtat said.

She said food insecurity is a broken food systems issue that cannot be solved with programs alone, there needs to be a “bigger vision.” Food insecurity comes from economics, Freishtat said, so other systems related to food need to be addressed, such as access to jobs, training and transportation.

But programs can build the bridge to policy change. In Baltimore, a virtual supermarket run by the health department is an example of something that began as a local program and ultimately impacted federal policy. In communities where transportation and access to healthy foods can be a challenge, the city has partnered with a grocery store to offer online grocery ordering and delivery to senior apartment buildings. Delivery is free, residents can pay for those groceries using cash, credit, debt or EBT/SNAP.

This successful program helped pave the way for a change in the 2014 Farm Bill. Online ordering for SNAP recipients is being piloted for two years in seven states, including Maryland and New York, with a few retailers.

One of the retailers involved in the pilot is Rosie, an online grocery platform started by two Cornell University students in 2012. Currently they are working with Buffalo-based Dash’s Market to pilot the program there.

As highlighted throughout this series, there are many programs in Tompkins County helping to increase access to healthy food, nutrition, but gaps still remain and thousands of people remain food insecure. Hoffman, of the Food Policy Council for Tompkins County, said more work is needed to help fight stigma. Ultimately, he said he would like food insecurity to get more attention locally.

“I do think that there is a role for local governments, which is not automatically recognized because I think the thinking is well the state and the federal government are taking care of that,” Hoffman said. “But I think that there are examples around the country of local municipalities, cities, towns that are taking actions to supplement whatever is going on in the state and federal level.”

This is our last installment of Feeding Tompkins, an eight part, collaborative series between WRFI News, the Park Scholar Program at Ithaca College, The Ithaca Voice, and Hot Potato Press. We value your feedback on our work. Please send any questions or comments to WRFI News Director Katelyn Harrop at newsdirector@ithacaradio.org.