Josh Fox, internationally acclaimed filmmaker and theater producer, spoke with WRFI’s Ryan Clover on WRFI Community Radio News on Aug. 21 and Your Morning on Aug. 22 to talk about his upcoming performance, The Truth Has Changed. This play is on a national tour in 30 locations throughout the U.S. and is coming to Ithaca on Friday, Aug. 24. 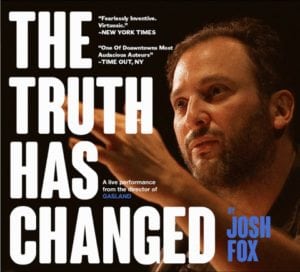 Josh Fox has made fracking a household word and used film to establish bold leadership in the environmental movement. He is described by the New York Times as “fearlessly inventive, virtuosic.”

The full version will also be available wherever you listen to podcasts, on Halt the Harm Podcast.

Links from our discussion: