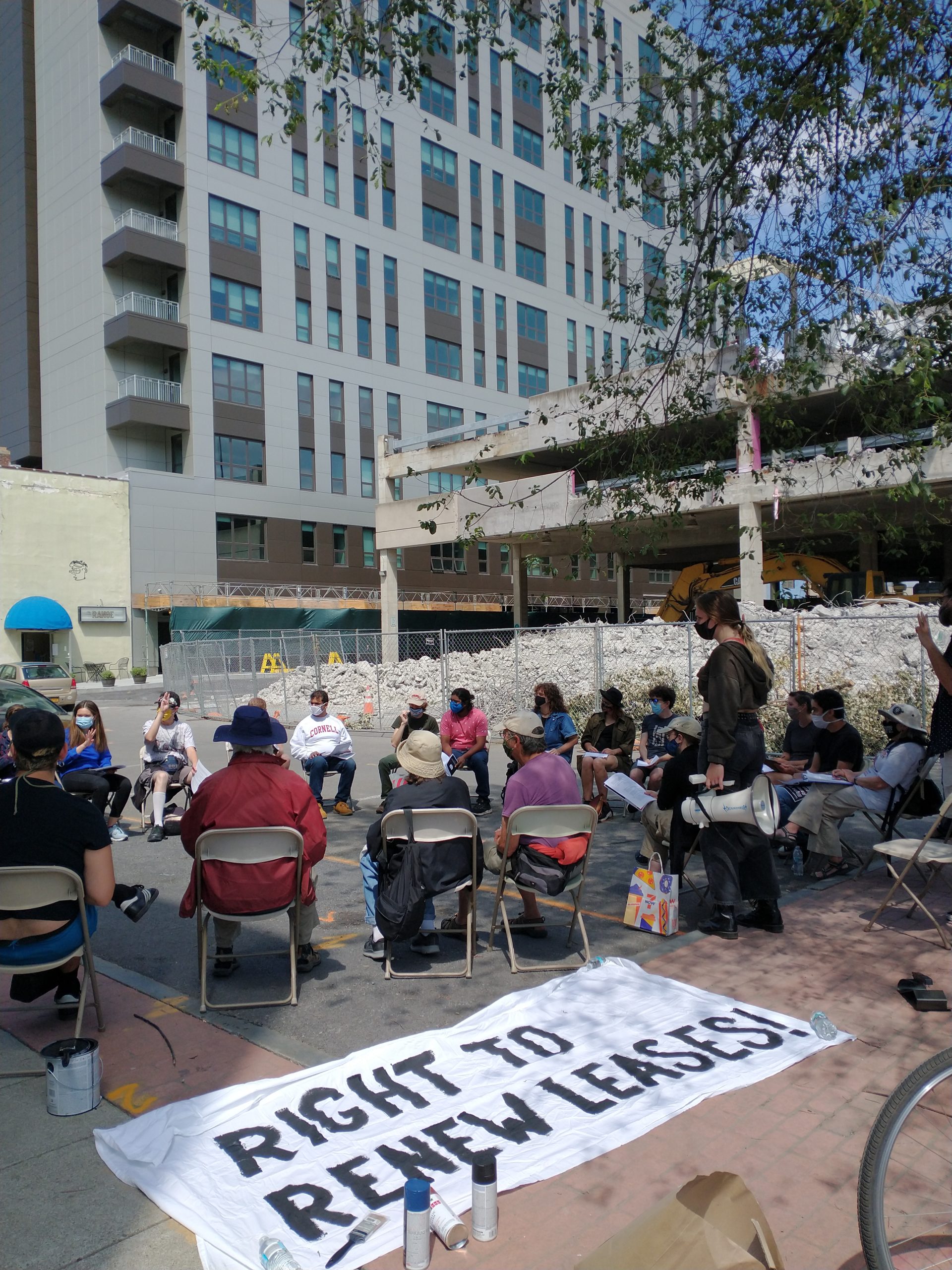 The Ithaca Tenant's Union in a 'Tenant's Assembly' outside of City Hall on Saturday, July 31st. (Ed Von Aderkas/WRFI)

ITHACA, NY -- As the threat of evictions looms over New York, The Ithaca Tenant's Union is pushing a bill that would take some power out of the hands of landlords and give it to renters.

The Tenant’s Union hosted a rally outside of Ithaca’s City Hall on Saturday, pushing a bill they drafted called the Right to Renew Leases Law.

The bill aims to do what it’s name says: make it a tenant's right to renew their lease. It's akin to the ‘Good Cause’ Eviction Law that passed in Albany in July.

Prior to the ‘Good Cause’ bill passing, an Albany landlord could deny renewing a renter's lease without providing a reason, which is in accordance with New York State law. Many other upstate cities and towns, including Rochester and Buffalo, are seeing iterations of this law gain interest in their local governments.

Genevieve Rand is an organizer with the Ithaca Tenants Union, and calls the landlord's power to not renew a loophole to evict tenants. She said it was used against her during the pandemic to circumvent the national eviction moratorium, but Rand is focused on the possibility that a lot of other tenants may soon see their leases go unrenewed in Ithaca.

According to the Pew Research Center, over one in five New York State residents have fallen behind on their rent. New York has funds available for tenants and landlords in such a position through the Emergency Rental Assistance Program (ERAP), but Rand made the point that a landlord may just decide they want a more financially reliable tenant even if they qualify for ERAP funds. That’s where the Tenant’s Union’s law would come in.

“There's a lot, a lot of people who were not able to pay their rent at some point last year,” said Rand. “And as a result of that there are a lot of landlords who are looking at that and saying, this person is a financially unreliable tenant and I don't want to renew their lease.”

Although issues around ERAP escape the scope of the legislation the Tenant’s Union is proposed. The program has had a painfully slow rollout, putting it on a collision course with the end of New York’s eviction moratorium on August 31st.

The mostly online application process  has been described as arduous and also dysfunctional, while possibly being the only lifeline for tenants who have fallen behind on payments in New York. Although New York has $2.7 billion set aside to distribute through ERAP to landlords and tenants, and the money has been open to applications since June 1st, funds have been slow to reach landlords’ pockets. The first checks weren’t cut until late July.

Tenants who have submitted an ERAP application before the eviction moratorium ends in New York are above the reach of an eviction suit until they’re deemed to qualify or not. Those who don’t qualify, or are bogged down in the application process may lose the roof over their head.

The Right to Renew Leases bill being pushed by the Ithaca Tenant’s Union would only help tenants who qualify and have received ERAP funding, but the law isn’t designed to address the potential of mass evictions as the moratorium comes to an end. It is also a far cry away from becoming a law on the book. In light of that, Rand said the Tenant’s Union is holding out hope that the moratorium will be extended.